For Children of Poor Working Mothers 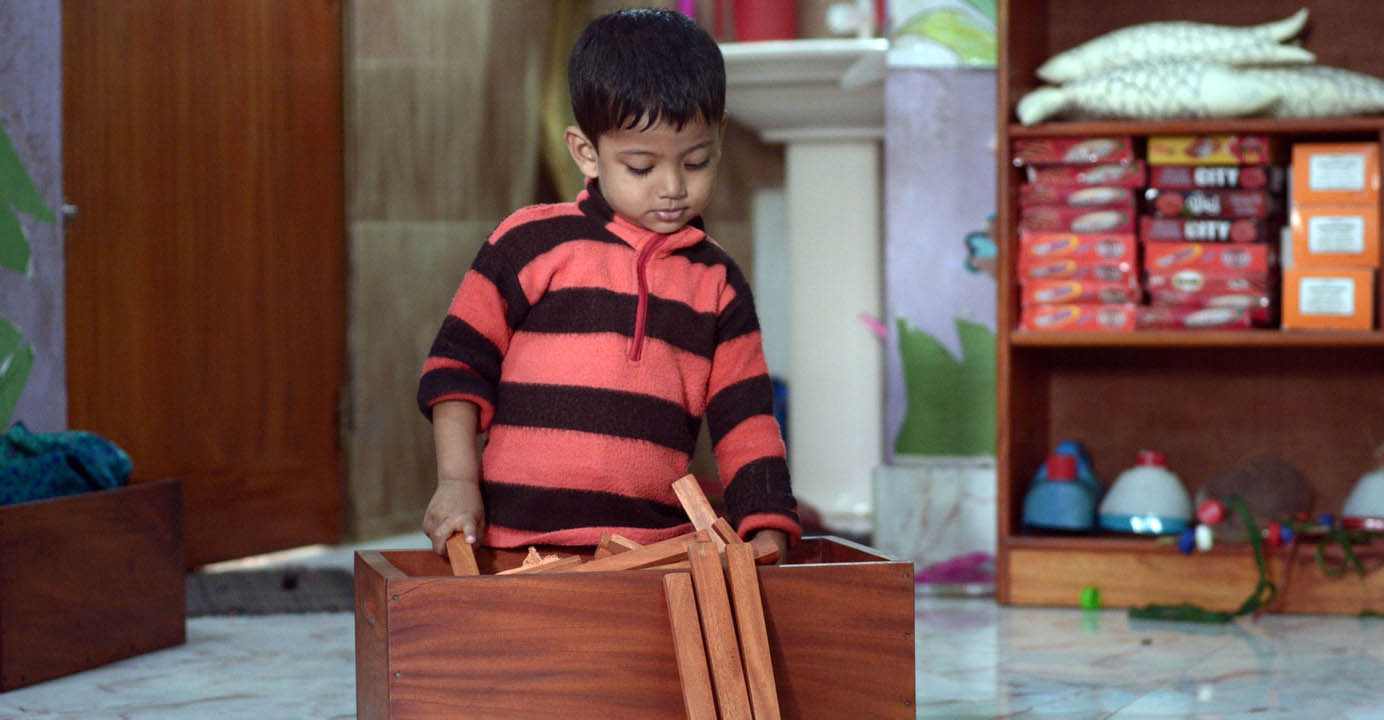 When Bashona, a maidservant and wife of a cobbler living in Mymensingh city, had her third child unplanned, she had to give up her job because she could not bring the baby to work. So, they were fallen into severe hardship because her husband hardly earned enough to maintain the family and arrange food for the newborn baby. Then the baby got sick and had to go to the hospital. So, Bashona had to stop sending her eldest daughter to school so that she looks after the baby and Bashona could go back to her work.

Many mothers from the poorest families in Mymensingh face a similar dilemma: they have often migrated from the countryside to the city, where they do not have the social network of the extended family that regulates childcare. The women have to work to ensure the survival of their families. Either the children are left to fend for themselves while the mothers are away from home, or an older daughter cannot finish her schooling because she has to look after the younger siblings instead. Girls who could not go to school themselves often become the mothers of the next generation in poverty already in their teenage years.

In such a situation, since 2015, MATI, together with Caritas Switzerland and Caritas Luxembourg (funding until July 2018), has been very successful in establishing eight Day Care Centers (DCC) in the city of Mymensingh. The DCCs not only offer children from the urban slums a safe place to be a child while their mothers work but also help to compensate for developmental deficits that they suffer due to poverty. In this way, they are prepared for the transition to regular school.

The concept applied here is called “Essence of Learning”. It was developed by Beatrice Rutishauser Ramm, a Swiss expert on early childhood development, who has been teaching this approach to local staff in various crisis countries around the world for many years. The core idea is that if children in childhood were unable to achieve certain developmental steps through play due to external factors (war, poverty, flight, etc.), they would not be able to learn later in school because their brains could not form the necessary connections. Therefore, children must be enabled to play adequately according to their level of development and to make up for lost developmental leaps. 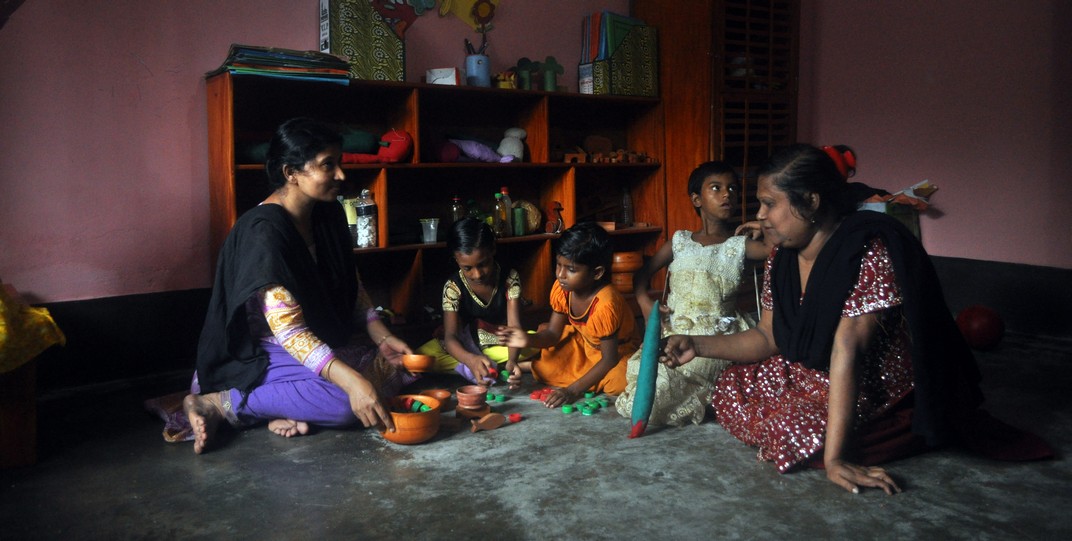 Each DCC has room for twenty children aged one to six years. The caregivers are trained by Caritas that consists of a 4-day theoretical course, followed by a 3-month practical phase in an existing kindergarten. The rented rooms are equipped for children. For example, there are wooden tables that are so low that the children can sit on them to paint, but if space is needed for the singing circle or movement games, they can also be easily stacked on top of each other in a corner. The MATI carpentry workshop has made sets of building blocks and wooden animals, and the seamstresses have made dolls from fabric. Part of the concept is also that all material is available locally and inexpensive, because the kindergarten is not supposed to be an “expensive place”, but adapted to the conditions at home. Therefore, a lot of work is done with recycled material and the parents help to collect it.

This is their contribution to the education of their children, besides a small monthly fee, which is adapted to their income. 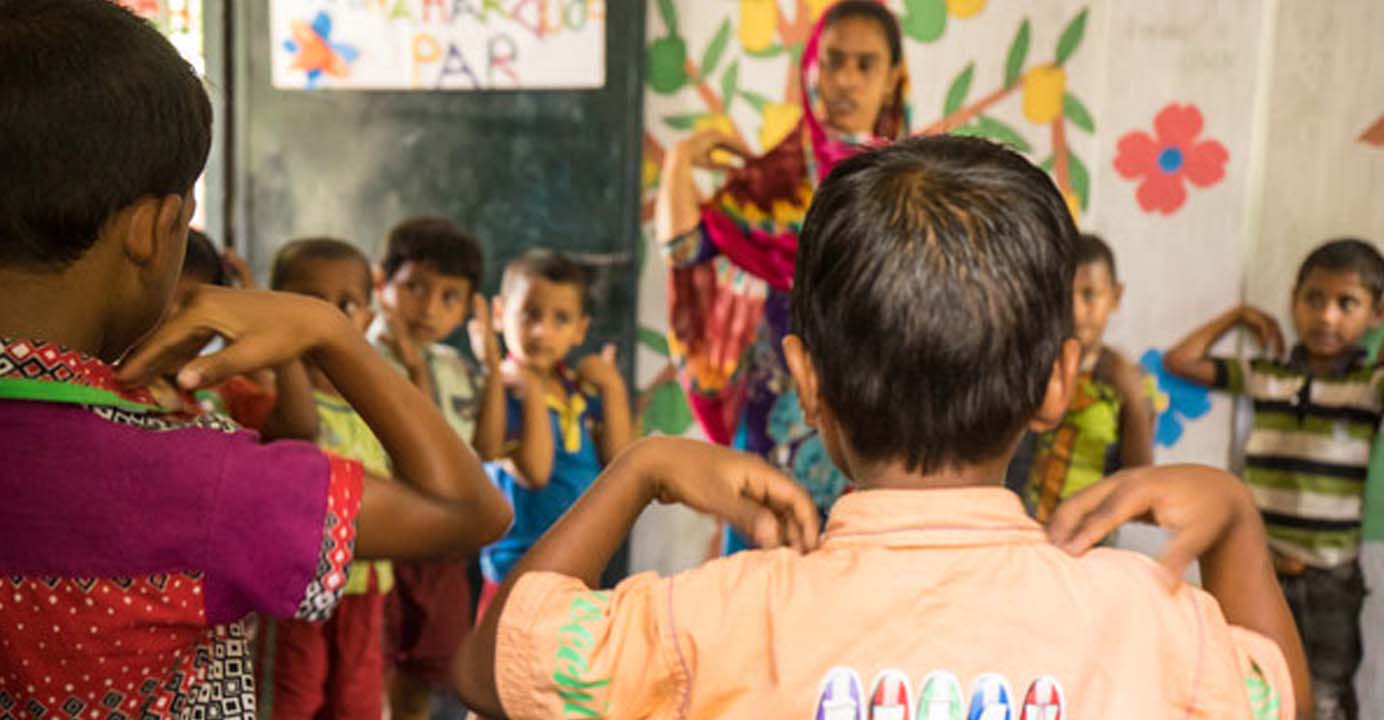 The caregivers are young women from the neighborhoods where the children they care for also come from. In this way, they know the families and the problems they have to deal with every day. At the same time, the kindergartens offer such young women the opportunity to receive a qualified education and thus to have a regular to earn income with which they can support their own family.

The children spend up to eight hours in a group on 6 days. They are brought by their mothers in the morning. The day in the group begins with a morning circle welcoming each individual child. Afterward, songs are sung together and combined with small movement games, which contribute to the general perception of the body and the learning of a body feeling. This is followed by the respective creative daily program, which is in the context of a weekly theme and is oriented towards the rhythm of the seasons and local festivals and traditions. For the transition to primary school at the beginning of January, the older children will of course also learn the alphabet, but only after they have prepared themselves playfully. Counting and small arithmetical problems can also be easily solved by the children, after all, they often play “shopping at the market”.